Race, however nebulous a concept, is typically thought of as static among individual human beings. And yet, millions of Americans may wake up on Census Day, 2020 as a member of a different race–at least, on paper.

The proposed changes are meant to help align census definitions with the way Americans think about race. It’s an incredibly difficult, if not quixotic, task, due in no small part to the census’ historical ambiguity on the issue.

Since its inception in 1790, the United States Census has tracked racial data. The federal government uses this data to track health and environmental outcomes across populations, promote equal employment opportunities, to redistrict, and to inform federal policy with regard to civil rights.

Because the decennial census data are used for redistricting purposes and inform race-related social policy, you can count on a lot of advocacy and politics influencing every step of the process.

The Census Bureau collects data in accordance with the guidelines set for it by the Office of Management and Budget. This data is self-reported (though it has only been this way since 1960) and is acknowledged to adhere to social, rather than scientific, definitions.

A proposal by the Office of Management and Budget suggests creating a new racial category, MENA (Middle East and North Africa), and combining the ethnicity and race questions. Together, both changes could affect the way over 60 million Americans racially identify.

Under current guidelines, people with “origins” in the Middle East and North Africa are considered white. Critics, notably the Arab American Institute, claim this categorization is an inaccurate vestige of anti-Asian immigration law from the 19th century that led Middle Eastern immigrants to advocate for white status. Creating a separate racial category will allow for better data collection and confer upon “MENA-Americans” the same legal protections and privileges granted to other minority groups, they argue.

Hispanics, on the other hand, are not currently considered a race by the census, but rather an ethnicity. In fact, the only two options given to Americans for ethnicity are “Hispanic or Latino” or “Not Hispanic or Latino.” This has meant that Hispanics have been free to self-identify with any race they feel accurately describes them–a choice that has produced some confusion. Given that freedom, a slight but increasing majority of Hispanics have chosen to describe themselves as white (53% in 2010, up from 47.9% in 2000). 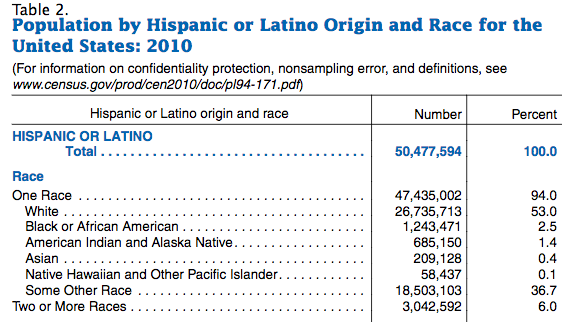 But by collapsing the ethnicity and race questions into one general question, the next census may change that.

Having Hispanic, Latino, or Spanish origin appear next to other race options may encourage Hispanics who had previously considered themselves white to simply identify as “Hispanic”–after all, Spain is notably absent from the countries listed under “white.” As Mike Gonzalez writes for National Review:

Now, if you’re a Mexican American who has always considered yourself white because of your Spanish ancestry, you have one choice. You would never check a box designated for persons of German, Irish, or other origins north of the Pyrenees, because that doesn’t describe you. So the only choice you have is Hispanic.

This is far from the first time bureaucratic lines around race and ethnicity have been redrawn. Different federal policies and amendments thereto have led people to alter their racial and ethnic identities for hundreds of years in America.

The most obvious example would be the term “Hispanic,” which was first officially used in the 1970s. It’s more of a political and bureaucratic convenience than a valid anthropological grouping, and is rarely used outside of the United States. Yet today many Americans celebrate Hispanic Heritage Month, listen to “Hispanic music”, and identify as Hispanics.

Another example would be Indian Americans’ historical flirtation with different racial categories. In the early 1900s, there were several court cases in which individual Indian Americans were determined to be white and non-white, depending on the case. In 1930 and 1940, the census listed “Hindu” as a race, but in 1970 Indians were instructed to self-report as “white.”

By 1980, that had changed again and Indian Americans were grouped under “Asian.” However in 1990, 10% of respondents with Indian origins self-identified as “white” and 5% self-reported as “black,” despite being specifically instructed to check “Asian” by the census. Non-Asian identification rose in generations removed from immigration. Among US-born South Asians, the portion that identified as white rose to 25% in 1990.

The best lesson is that race in America has nothing to do with biology and is as informed by politics as much as it informs them. Racial identities are more idiosyncratic and plastic than we tend to think of them as being. The census doesn’t–and cannot–tell us about the actual genealogical diversity of America; what it actually measures is our collective perception thereof. That perception and the metrics by which we assess it are constantly changing.

The great irony here is that the OMB and the Census Bureau are both causing and reacting to changes in perceptions of racial identity in America! In order to ask questions the way they think respondents want to hear them, they inadvertently place their thumbs on the scale. Even though racial and ethnic data are self-reported, they will always be influenced by the definitions put forth by the OMB.

5 thoughts on “Racial Gerrymandering (The Other Type)”