A notion that’s become somewhat common among the left in recent years is that American conservatives are demographically doomed. Very often, this is discussed in terms of race and age—an allusion to the declining share of the non-Hispanic white American population and the accompanying erosion of its political sway, as well as the fact that conservatives tend to be older.

On its face, this seems like a tidy theory. But under the surface, I think it’s a great deal more complicated than the (sometimes wishful) theorizing of liberal pundits allows.

First, as I wrote a couple of weeks ago, the American concept of race, whiteness in particular, is a moving target. I think there’s a solid chance it will look quite a bit different in a couple of decades. But a more interesting foil, I think, to the liberals-own-tomorrow theory manifests itself in fertility rates.

People are having fewer children the rich world over, causing consternation among governments of countries whose economic futures depend on population growth. The political implications of this alone are fascinating, but the general trend obscures another interesting story: the intranational ideological disparity in fertility.

Liberals, it appears, are having fewer children than their conservative counterparts. Combing through General Social Survey (GSS) results from the last 10 years provides a clear view of this phenomenon. Among heterosexual men between the ages of 35 and 50, those who identify as “extremely liberal” had on average 1.79 children, whereas those describing themselves as “extremely conservative” had 2.43. For women, the difference was even starker: “extremely liberal” women had 1.69 on average to “extremely conservative” women’s 2.63. 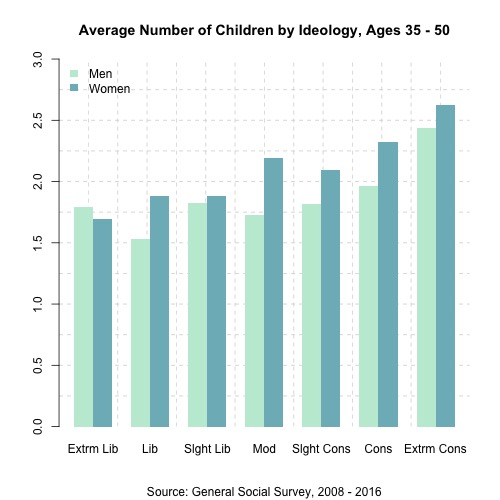 Many factors contribute to this disparity—most of which concern liberal women’s increased preferences for family planning. Anecdotally, liberals are later to marry, more likely to pursue advanced degrees, less religious, and, among women, more likely to pursue careers—the confluence of which makes for fewer babies. This trend seems to have gotten stronger over the past few decades.

All this is significant because there’s at least some evidence that, most of the time, children end up inheriting their parents’ political views. This makes sense whether you view political ideology as a product of nature—differences in brain structure that give some a proclivity for novelty and others an aversion to risk—or nurture. Either way, if liberals are bearing and raising fewer children, it could mean fewer liberal adults down the line.

There are a few signs this might already be happening. One study found that after decades of decline, high school students’ support for traditional gender roles in the family has been rising steadily since 1994. Goldman Sachs pegs the ascendant Generation Z as especially fiscally conservative. Finally, a survey by the Hispanic Heritage Foundation of 50,000 14 – 18-year-olds found—shockingly, in my view—that the majority identified as Republicans and would support Donald Trump in the 2016 election. (An important caveat to this survey was that nearly a third of those polled would have declined to vote, had they been able.)

The policy preferences of an increasingly conservative nation are one thing—and obviously ideology colors one’s assessment of how good or bad that would be. But what really worries me is the thought of an even more politically segmented society; one in which an increasingly liberal minority of elites maintains control of the nation’s cultural power centers and an increasingly conservative majority grows frustrated with its obsolescence in the new economy, which, intentionally or not, places a premium on educational attainment, city-living, and delayed entry into family life.

Whether it comes to pass or not, we shall see.

9 thoughts on “The Kids Are All Right”